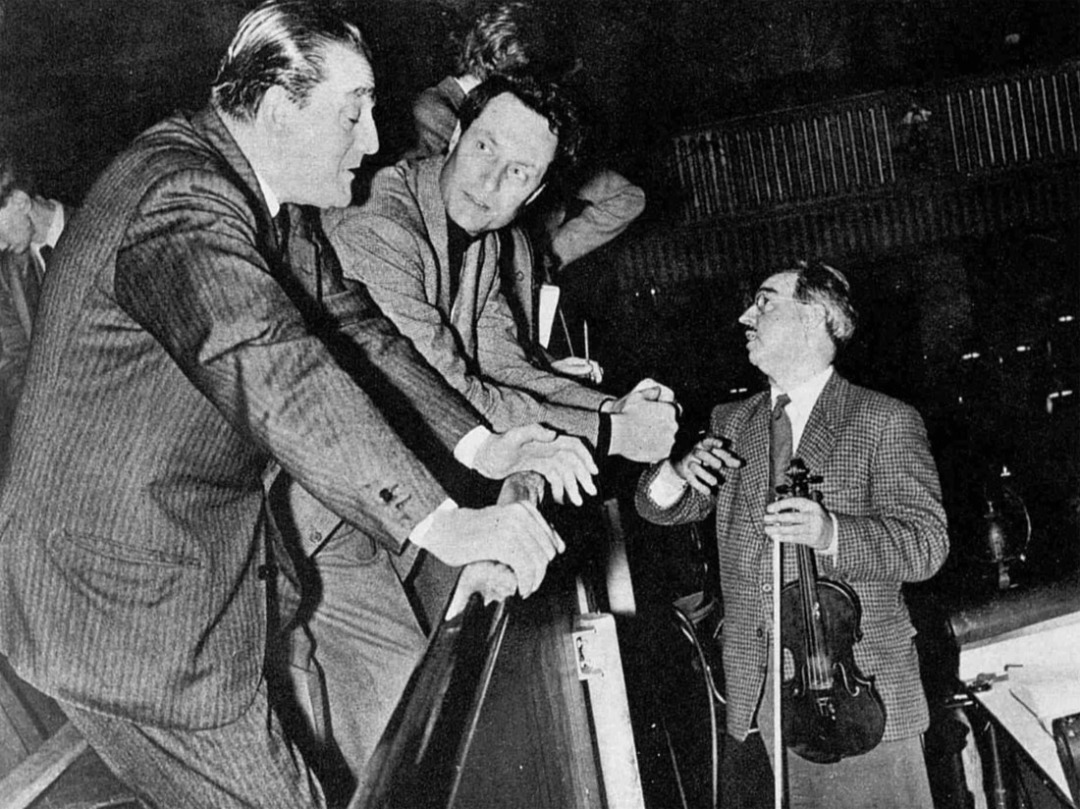 The curtain goes up on the second act of Verdi‘s Don Carlos. Ten days before the night, the scenery is there but no costumes. Monks in mufti kneel among the tombs of the Convent of San Giusto. Don Carlos, robust Canadian Jon Vickers, enters in pullover and grey flannels. Rodrigo, Italian baritone Tito Gobbi, wears a double-breasted suit. While Don Carlos confesses his love for his step-mother and the two friends vow eternal friendship, a silent figure follows them as they around the vat stage.

At one moment, he slips into the wings or behind a piece of scenery, at the next he appears right behind the singers. Occasionally he puts a hand on one of their shoulders and gently manœuvres them into a different position. With the entrance of the royal procession, the court and the standard-bearers, he weaves his way in and out, adjusting this singer’s position, altering another’s. Meanwhile, the singing with the full orchestra continues uninterrupted.

The silent figure is the producer, Luchino Visconti, and just as he rarely stops the flow of the action, so conductor Carlo Maria Giulini allows his orchestra to continue to the end of the act. Then the “post-mortens” take place. For Giulini, it means a painstaking explanation, in a mixture of Italian and English, of how he wants each passage to be taken. From time to time, he seeks help from Covent Garden conductor Edward Downes, who sits through-out every rehearsal marking a score with Giulini‘s instructions for the Opera House records. While the orchestra replay movement after movement, Visconti is on stage, quietly and efficiently explaining his interpretation of Verdi‘s lugubrious Spanish tragedy.

Chorus master, bluff and rotund Douglas Robinson, receives his instructions in Italian (which fortunately he understands perfectly) and relays them to the cast. Filippo San Just and Enrico Medioli, Visconti‘s assistants who both speak English, are always at hand to help the maestro with his imperfect English. When the orchestra finally stops, Visconti appears through the curtain. “Caro, noi siamo pronti — We are ready” and one again the act is run through. Covent Garden have entrusted the most important production of the centenary season in this controversial, brilliant Italian team. Visconti is famous in the Italian theatre for his productions of Chekov and Arthur Miller. Anti-fascist and jailed during the war by the Nazis, he chose  for his immediate post-war productions plays that had hitherto been banned. He devoted his time equally to the theatre and cinema, finally becoming interested in opera when he saw Maria Callas in Norma at the Rome Opera House. He realized her dramatic possibilities and was determined to develop her as an actress. Her tremendous performance in La Traviata and more recently in Donizetti‘s Anna Bolena at the Scala in Milan have proved how right he was.

Although Visconti broke with tradition in almost everything he allowed his Traviata to do, the conservative, highly critical audiences of the Scala realized that by making a prima donna act as well as sing he was bringing an entirely new significance to opera.

For that epoch-making production, Giulini, stepping into the place vacated through Guido Cantelli‘s tragic death, was the conductor. Lord Harewood was in Milan, and no doubt his report influenced the Opera House in the planning of Don Carlos. Now for the first time Visconti has a leading lady who is not Callas. Gre Brouwenstijn from Holland is to sing the part of Elizabeth de Valois in this, his first production outside Italy “Working with Visconti is a tremendous experience.” she says. For this long four-hour opera, which is to be given in its entirely, she must certainly he grateful for such expert guidance.

Even with Visconti‘s sensitive production, much of this fine text will inevitably be lost on an English audience, for it is sung in Italian. With the librettos of many operas verging, frankly, on the fatuous, a sketchy knowledge of the plot usually suffices. Don Carlos, however , with so many complex issues involved, must lose by not being fully understood.

The sets of this sombre tragedy are painted throughout in grey and whites in the technique of the cinema. Here again is the Visconti influence, for décor and costumes are of his own invention, interpreted by a team working around him. The magnificent costumes have been evolved from the Spanish paintings of the period. “I want,” Visconti says, “to have the singers corseted so that they can hardly breathe, let alone sing!” They must be rigidly encased in their costumes. I want to re-create the stiff, unrelenting magnificence of the Spanish court.”

Although this will be one of the Opera House’s most costly productions (the price of the stalls has been raised to three guineas) dressing it provides a major headache for Olivia Crammer, the head wardrobe mistress. “This lot are used to working in Rome. They’re used to having those fabulous velvets and brocades that are used for Papal Church ceremonies. You just cannot get yards of Genoese velvet and that sort of thing here so I have to improvise.” Yard upon yard of gold lamé, silk, satin and velvet are being backed with canvas and buckram and then laden with heavily-embroidered jeweled panels and trimmed with fur. Every day Visconti, himself a member of the princely Milanese family, visits the wardrobe to see the progress on his King’s and Prince’s trappings.

The whole quiet efficient operation of staging this huge production is explained by one word — planning. Both producer and conductor know exactly what they want. it is uncertainly and trial and error which lead to tantrums. At Covent Garden there are none. Opera under the handoff one of the great producers of our time is certainly moving a long way from the days when even the most ardent music-lover preferred to hear rather than see it!